They are our present.

That’s a phrase that I heard several times back when Justin Trudeau made school presentations in Manitoba, before he was an MP. It struck me as inspiring then, but as I’ve grown up I see its relevance even more.

Today I spent the afternoon with Jim as he spoke with a grade 9 class. I was amazed at some of the questions these students posed. In lieu of the usual “Why did you run?” or “What does an MP do?” there were hard-hitting, substantive questions surrounding issues that affect all Canadians. There were questions on the red dress project (for murdered and missing indigenous women), keystone pipeline, legalization of marijuana, controversy about the niqab, Syrian refugees and ISIS, and minimum sentencing. These students were well-informed and engaged. 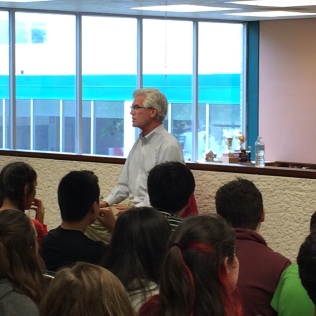 In perhaps one of the more interesting exchanges of the day, a young man asked why Jim was wasting his time with a bunch of grade 9 students who couldn’t vote, when he could be out talking to people who could actually do something. I love that Jim talked about how they would go home and have conversations with their parents. It sparks a dialogue that is needed in a country where, in the last election, over 60% of young people aged 18-25 did not vote. These students may not be able to vote in Election 42, but they will be able to vote in Election 43 (here’s hoping there’s not another federal election for 4 years!) We want to spark that interest in giving back, in being involved in community, now.

I saw this video from Craig Kielburger the other day where he talked about how students need to be encouraged in their early teens, because if you’re just starting to have the “get out and vote” conversation with them at 18 or 19, it’s already too late. I think it’s worth watching.

One of my first political memories was grade 5; there was a provincial election going on and our class ran a mock election. We had the MLA candidates come in to talk to us and I ended up volunteering on a campaign. That’s all it took to get me hooked – and look where I am today. This is why it’s so important to speak with students.

This is why I am so happy to support the Liberal Party of Canada, and especially Justin Trudeau

There’s been a lot of talk on the Canadian political scene lately about divisive politics. The politics of fear that the Conservative government has become known for. Pitting one group against another. What has our country become when we have people turning against each other? What does it say about our society when not only is this happening, but this is tolerated?

I’m proud to be working to elect Jim Carr in Winnipeg South Centre, and was never more proud that at a debate last week when he said these words:

We don’t build ourselves up by tearing others down. I have no interest in personally attacking other candidates. We’ve had too much of that.

This is why I work so hard for the Liberal Party. This is why I’ve committed thousands of hours and years of my life. To help make this country a better place.

There was a huge rally in Brampton today, where over 7,000 people came out to hear Justin Trudeau speak. Let that sink in for a moment. A political rally (in Canada!) for a party that, at the dissolution of the 41st Parliament, held only 36 seats. There were over 7,000 people in attendance. I can’t even fathom that. But it happened. It’s because we are giving people something to vote for. We are inspiring Canadians from coast to coast to coast with a message of hope.

One of my favourite sections from Justin’s speech was this:

With the many millions upon millions of dollars he’s spent on attack ads, lots of people ask if I think he’s afraid of me.
I don’t.
Stephen Harper isn’t afraid of me, my friends.
He’s afraid of you.
And he should be (afraid of you).
His worst nightmare is a confident and hopeful citizen who demands better for her country.
He wants you to believe that better isn’t possible. His job depends on it.
Well, we’ve got news for you, Mr Harper:
This is Canada. And in Canada, better is always possible.
This is a great country, my friends
It needs a better government.

Part of my job is going to events and the comments I hear on the campaign trail is inspiring. Today was no different. At a harvest supper, people kept coming up to Jim to tell him they were voting for him (or had already voted for him) and they were happy that he was standing up for the residents of Winnipeg South Centre. It makes all the late nights and early mornings worth it. I can’t wait to see the change that will sweep the country come October 19.

**Click here for the full remarks from today’s rally in Brampton.

Thank you to our volunteers!

We are 16 days away from Election Day 2015. It simultaneously feels like this date would never come AND that the date has come too soon.

Today we had a little get together for our volunteers – a show of appreciation for the thousands of hours that they have put in to the campaign already and a bit of an inspiration for the hard work yet to be done in the next 16 days. Volunteers truly are the heart of any campaign, and I have met some of most incredible people over the past year, gearing up for Election 42. This is not a sprint, it’s a marathon. This campaign did not just start on August 2 – it has been going on for months and months, with many candidates out knocking on doors for over a year.

Here are some photos from today’s gathering – including my favourite one of a 4-legged supporter, Fyfe! 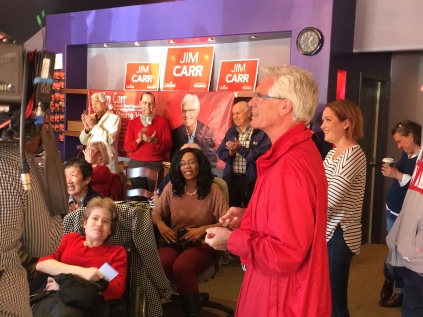 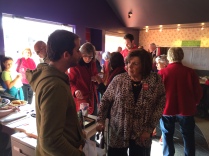 Former MP Anita Neville stopped by to show her support

The party spilled over to the parking lot

Fyfe supports Jim Carr – do you?

Do we have a #dogslovetrudeau yet? 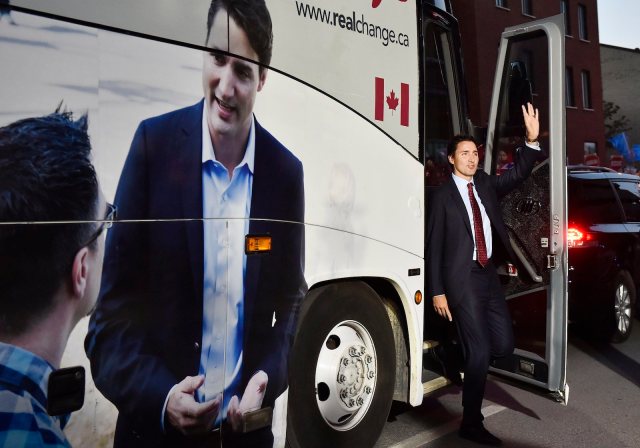 The final federal leader’s debate of #elxn42 was tonight and it was in French. What is different about this election is that there hasn’t been a nationally televised debate (although it could be argued that the other debates were available online and therefore national in scope. I’ll leave that argument for another day).

What I’ve liked is that the variety of debates has given voters a continuous look into the leaders and what they stand for. However, I am part of a distinct subset of the population that already has a political opinion and would watch any political debate, regardless of its reach. There have been 3 debates in English and 2 in French, and they have covered a variety of issues. It’s worth noting that there has been some controversy over the exclusion of Elizabeth May and Gilles Duceppe at the debates.

So what was at stake tonight? With the NDP bleeding support in Quebec, Mulcair needed to stand head and shoulders above everyone else. We’ve all heard the refrain “Justin Trudeau is just not ready”. I think one of the best tweets I saw all night was this one:

Trudeau wins a lot of debates for a guy who's just not ready. #cdnpoli #elxn42

Muclair just wasn’t able to “wipe the floor” with Justin Trudeau in the debates – as he promised in this video here.

Justin has killed it at every debate, and I definitely think his closing statement tonight was the strongest of all the debates. Look at what Paul Wells, columnist for Maclean’s magazine and host of the Maclean’s National Leaders Debate that was held in August, said about tonight’s debate:

But I think it was Trudeau who cut the most impressive figure. He gave a sense of poise, policy ambition and cocksure readiness to spar with any of the other leaders. Once again I was reminded that one reason there have been so many debates in this odd campaign season was because Trudeau’s opponents wanted to multiply his opportunities to screw up. He’s now put the last debate behind him, and to some extent their gambit has backfired. Marc Garneau, who failed to stop Trudeau during the Liberal leadership race two years ago, could perhaps have warned the other parties about their likelihood of succeeding.

Here were some of my tweets from tonight’s debate. What did you think?

.@JustinTrudeau is focused on the issues that affect Canadians most – infrastructure, jobs, the economy. #faceafaceTVA #elxn42

.@JustinTrudeau is on fire tonight. Calls out PMSH "You are completely disconnected from reality" #faceafaceTVA #elxn42

.@JustinTrudeau on point again. Rightly calls out PMSH – It’s been 10 years & you’ve done nothing for the environment #faceafaceTVA

It’s now a point of pride that we’ve made it 61 days in and I’ve kept up my blog this whole time; it’s definitely at the point where I can’t stop now!

Tonight was the second community debate in Winnipeg South Centre and it was a different atmosphere. Instead of a formal panel, it was a town hall debate style with questions from the audience. It was a less structured event with much interaction from participants; at times, the candidates were interacting with the audience confirming questions or trying to respond to concerns. At times, the moderator seemed to have some difficulty keeping the community centre in line.

But the atmosphere did take an interesting turn of events: the Green Party candidate brought a ‘friend’ to the event, representing the Conservative Party. This got a lot of play in media, both online and traditional.

Conditions for indigenous children on reserves is appalling. All children should have the opportunity to succeed.

We will invest in green technology and infrastructure, and lead the national conversation on climate change #elxn42

My first responsibility is to be available to the constituents of #WinnipegSouthCentre. I am committed to hosting quarterly town halls.

For too long we've had Ottawa's voice in our community. I want to represent your voice in Ottawa. #elxn42 #realchange

I invite you to follow Jim’s social media to stay in touch to what’s going on in the riding.