Canada’s democracy is in trouble. Although we are known as one of the world’s leading successful democracies, we have slowly started to take this democracy for granted. Year after year, voter turnout has declined – current youth voter engagement in the political process is extremely low, the lowest of all age demographics. It’s very telling; Canadians are checking out of our democracy in droves. 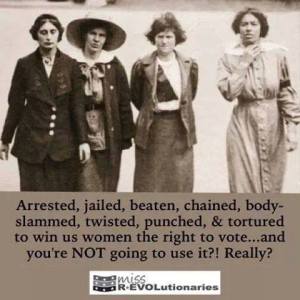 I picked up “Tragedy in the Commons” by Alison Loat & Michael MacMillan a couple of weeks ago, around the time of the #CBCAsks: Is Politics Broken event that was held in March. (If you have time, watch this video of the event). This book is amazing, but also raises some discouraging truths. Here are some recent statistics:

When did we start taking our civic responsibilities for granted?  When did ‘civic responsibilities’ become something to be scoffed at, something scorned or something forgotten altogether? The millennial generation is among the most informed and educated, and among the least engaged in the political process. The issues that are being debated now, such as income inequality and environmental measures, are issues that will affect the millennial generation (of which I am a part of) the most in coming years. Young people need to take their seat at the table. Every vote matters; if all the youth showed up to vote, it would dramatically change the outcome of the federal election.

Election 42 is a crucial election, one that will have wide-reaching ramifications.  Start thinking about who you will support – take a look at what all the parties have to offer, and never forget that your voice matters.  You can make sure that Elections Canada has your correct address and you are on the voters identification list with your correct, current address by registering to vote. This helps make sure you are able to vote without any hiccups. Whether you’re a Liberal or not, it’s important to get out and vote. Here’s the link.

1 Response to Is Politics Broken?

I want to hear from you - what did you like? Let me know! Cancel reply